The calendar is the basis of most calculations. At what point a change of month or a change of year can be decisive for constituting a qimen grid or a bazi theme and completely changing the interpretation.

For the bazi for example, this concerns a little over 3% of the population whose birth date is on a month-long border. But in bazi, the month is the determining pillar, the interpretation will be completely different and with it, the representation that the person can have of itself.

It’s the same to use a legal time, ie the time indicated by your watch or your smartphone, or the real time, ie the actual time related to the position of the sun .

It is not up to ProSuite to decide in the debate whether it is relevant to work in Beijing time, in legal time or in true time, in the same way as using a solar or lunar calendar. That’s why ProSuite is fully customizable to fit your way of doing things.

ProSuite Options and the Almanac Pro default use the local time zone of your computer. All new cases created in ProSuite or the dates analyzed in the Almanac Pro will therefore have this zone by default.

If you are traveling or if you want to work with a particular time zone or use the Beijing time zone, you can set a new time zone by default. Simply enter the name of the city, region or country you are interested in. All new cases will be created with this new time zone.

Cases created previously are not impacted.

In ProSuite, you have the ability to individually change the time zone to handle specific cases. It is therefore not necessary to change the default time zone for this.

ProSuite offers the possibility to indicate the time zone case by case and to work in legal, true or Beijing time.

ProSuite takes into account the history of time zones. Indeed these are not astronomical, they are just conventions taken by states and therefore subject to variation, especially for summer time, but not only …

In 1923, summer time comes into effect from March to October. But in June 1940, due to Nazi Germany’s occupation, the time of the occupied zone was advanced by one hour to be identical to that of Berlin. Faced with the problems that this raises, especially for railways, all of France goes to Berlin time in February 1941. At the liberation in 1945, France goes back to UTC + 1 all year long, then the shock oil tanker brings back summer time in 1976. Many other cases exist around the world, for example in 2015 North Korea has ironed from UTC +9 to its historic time zone UTC + 8:30.

If you work in legal time, that is what matters is what is written on paper, you have nothing special to do, there is no need to correct the time. After all, when someone asks you the time, you answer it is 2:12 pm because that’s what’s on your watch. You do not say it is 12:12 in the sun. The person is likely to miss his train.

Normally in the Taoist arts, we take things as they are, so the legal time.

Westerners have a different astrological tradition where the reference model is related to the position of the planets at the moment. In this case, it becomes important to know the time of birth from an astronomical point of view. For this, it is essential to inform the place of birth. 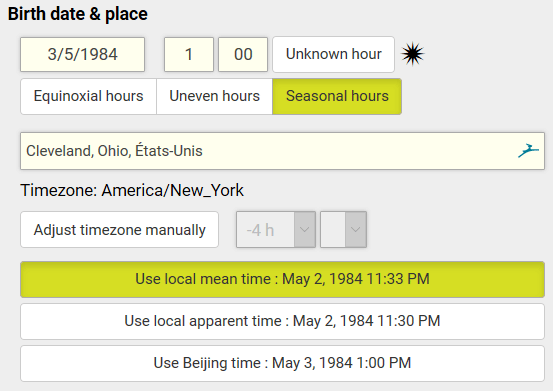 ProSuite offers 3 ways of dealing with hours, which has an impact on the notion of day or night used in some calculations, to evaluate the strength of the master of the day for example, as well as the pillar of the hour in the case of unequal hours.

The equinoxial hours are the simplest. Duration 2h, the day starts in [mao], ends in [you].
Seasonal hours follow the same principle, but the day begins in [chen], ends in [shen] in winter, begins in [mao], ends in [you] in spring and autumn, begins in [yin], ends in [xu] in summer. This shows the difference between the daytime period and the nighttime period depending on the season.
The uneven hours take into account the reality of sunrise and sunset on the date and place considered. It is therefore essential to provide a place and work in real time (average or apparent). If you choose this mode, alerts may appear in the Case Edit Panel to remind you of these conditions. If they are not met, ProSuite takes seasonal hours instead.

An option sets the default choice. You can edit it directly when creating or editing a case. Each case can use a different time processing mode.

You will find in the book The Bazi, an aid for traditional Chinese medicine published by Marip detailed explanations of this approach and examples.

By continuing to use this website, you consent to the use of cookies in accordance with our Conditions d'utilisation et générales de vente